Hi! I’m Naomi Wurtzel, a 10th grader at The New School. In my Humanities class, we were tasked with taking a primary source photo from the Great Depression of WWII era and write a historical fiction piece about it. I chose to set my work in the WWII era and did research about the group the women in the picture were in, then reflected that into my writing. Below you will find the reference photo, the historical writing, then my research and reasons for how I wrote my historical fiction. Please enjoy! 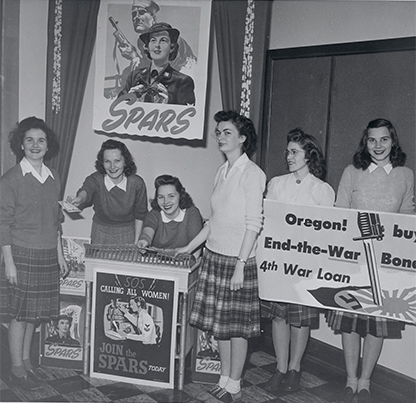 You’ve been away for about a year now. I haven’t heard from you since April, yet I still have hope that if I keep writing you’ll write back. I’ve inquired after your location a multitude of times, yet no response from you. I follow the newspapers relentlessly. I see the death toll and pray for you each time the numbers show in bold across the headline. I wrote again to the army. Still no offers of employment overseas so I can see you outside of the photographs on our wall. Why did you always insist on not smiling in photographs? I miss your radiant smile.

I’m doing something though, not just sitting in the house as you’d feared I would. I joined the United States Coast Guard Women’s Reserve. We much prefer the name SPARs, Semper Paratus – Always Ready. It’s not the fighting I wished to be involved in but it’s something. They sent us women to a training camp. I learned how to fight like the other men in the Coast Guard. I could probably beat half of them! They only did the training as a precaution though, us women just took over the clerical jobs all you men left behind for the fight. You carry a gun while I carry a plaid skirt and pamphlets. We stand outside the men’s speeches, recruiting their wives to help in our quest to sit on our butts all day for the boys fighting away. I’m being unfair. It’s not as bad as I make it out to be. I only wish our illustrious government would give us women a chance at something. I enjoyed that they let us even go to the training camps, letting us learn skills that most women don’t have the pleasure of learning. You know the best part about serving my country in the Coast Guard? I get paid. And not just a small sum, but the same price you would earn if you were still here with me.
Sarah, Allen’s wife, joined with me. Allen’s not coming back. Sarah found out last week. She only returned to work yesterday. Some other women and I baked casseroles. Put together a nice buffet for her and a few other of the grieving wives and workers. They looked so distraught. There is one woman who lost both her husband and son. She hasn’t returned to us yet. Stays at home with her parents. We tried to distract her with different foods and books but whatever it was, she just stared at that flag in her window, not sparing us a glance.

God, if you care for my happiness at all, I beg of you to not have me open my door and receive one of those God awful letters. The letter with a cookie-cutter message to the newly widowed wives. Don’t make me hang the gold star in the window and hear the neverending calls of “I’m sorry” from our neighbors. Don’t make me accept countless casseroles and gorge myself in them to distract me from my pain. John, I swear to every God in the universe, if I receive one of those blasted letters, I’m sailing to fetch you and shoot you myself. I will never forgive you if you leave me to fight this war myself.

Please write back to me this time. You promised.

Sending you all my love and prayers,

The primary source features a group of young women advertising for the United States Coast Guard Women’s Reserve. I focused on the woman in the middle of the group who seems uptight and a bit grumpy. I knew I wished to write about a woman who wanted to be fighting, but couldn’t and the expression of the woman in the middle seemed to speak to that. I would imagine that if I were wanting to fight, but denied because of my gender, I would also be a tad bit upset to be at home in a plaid skirt. I also reflected a lot on the SPARs group that the women in the picture were advertising for. I used that group as a way to show how women were impacting WWII in a way other than filling factory jobs. The image supplied two different perspectives on a woman’s role in the war. One was of women happy to be serving from afar, while the other was of angered women who wanted to join the fight. I chose the one I felt I could connect more to, which ended up being the woman who wished to fight.

This point-of-view is from a woman serving in SPARs during WWII. I did a good amount of research to paint a clear picture of who the women in SPARs were and how they were a factor in WWII. SPARs was the United States Coast Guard Women’s Reserve that was created around the same time that America really joined in the physical fighting aspect of the war. The women who joined SPARs were actually sent to month-long training camps but when they were actually employed, mainly took over clerical jobs left by men who went to fight. I did find a few sources that mentioned that the pay for women in SPARs was in fact equal or close to that of the men in the Coast Guard and other groups similar to it. The acronym of SPARs stands for the latin phrase “Semper Paratus” meaning “always ready.” I chose to set this letter on July 5, 1944 for a specific reason. This is almost a month after the Battle of Normandy started. That battle killed 16, 293 american soldiers in total, one of the higher American casualty numbers than other WWII battles. It would make sense that if a wife were watching the death tolls, she would become increasingly worried if she doesn’t hear back after a month from her serving husband.

My writing is a very straightforward letter from a wife in the United States to her husband fighting in WWII. I felt that if I were in the place of the wife, who I named Heidi, I would not wish to be occupied by making the letter sound eloquent. A letter allows the story told to be more personal. Since Heidi is writing to the person she loves, she is not holding any feelings back like she may do otherwise to seem strong. She can express multiple emotions with the words she uses. For example, you can tell she is angered by the gender standards of the USA and in war due to her criticism of wearing plaid skirts instead of a gun. You can also tell that she is fearful for her husband, John’s, life. I wished for her to be an independent woman, yet still caring deeply about her husband. There were many standards in the 1900s that were around independent women not wanting companionship, and I wanted Heidi to defy that by having the support of her husband to be independent. There were many letters I found online that were from the fighting men to people back home, but not many that were from home to the soldiers. I hoped to show the perspective of a soldier’s wife in a way that may not have been preserved as well as other accounts of the wife’s perspective.