The Tale of the Treacherous Seas:

My Dungeons and Dragons Campaign

This semester I got to participate in many different clubs, but one that really stuck out to me was Dungeons and Dragons club. Dungeons and Dragons (or D&D) is a fantasy roleplay game where the Dungeon/Game Master creates a quest for each players’ characters to interact with. You can have epic battles with mythical monsters, talk with NPCs, and level up your character over time to make them a respectable hero or villain. While I have loved being a player in other people’s campaigns before, I am extremely excited to be able to hold my first official campaign. 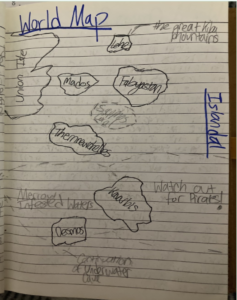 For my first campaign, titled The Tale of the Treacherous Seas, I chose to make it pirate themed, and hold almost the entire story aboard a pirate ship. My origin story for the world is essentially this: For many centuries, the many islands of Islandal lived in isolation, each one surrounded by hundreds of miles of water. While the islands in this region weren’t that far from one another, the mighty Kraken ruled the seas. For years, the people all across Islandal were terrorized by the Kraken, their boats destroyed, their shores massacred, and their citizens eaten. Eventually, the people rose up against the Kraken and formed a militia of boats to defeat it. After a very bloody battle, the islanders were able to finally wound the Kraken and trap it in an underwater cave under the island of Desmize. They then sealed the exit with rocks and left it there to starve or die from it’s wounds. A hundred years later, and there are rumours of sailors going missing in the area, being fed to the Kraken. Something is keeping the Kraken alive. Out of fear of returning to the old ways, the Islandal Union’s government hires 5 adventurers to travel to Desmize, stop the accomplice, and kill the Kraken once and for all. 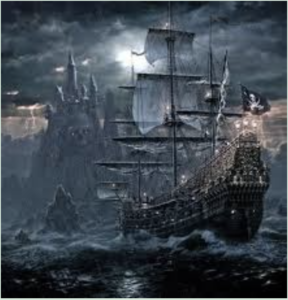 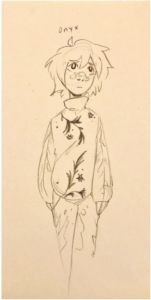 -Nervous but trying his best 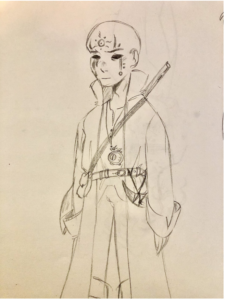 to please a malicious god 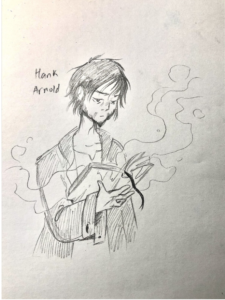 -Ranger and folk hero that came

from the ranks of the common people

-Skilled in acrobatics and slights of hand

The 5 adventurers are getting to Desmize by traveling on Captain Lenore’s ship, The Lady Fate. Each of the pirates aboard the ship are named after a character or an author from a classic novel or poem (Ex. Lenore from Edgar Allen Poe’s “The Raven”) and they are a diverse group of mythical creatures, including humans, elves, tieflings, dwarves, and hobbits. Included here are hand drawn images of three NPCs (non-playable characters) throughout the adventure, Lenore, Cassandra, and Gilbert :

We are now 4 sessions into the campaign and a lot has happened. All 5 characters being played are now a part of the Lady Fate, a pirate ship that is captained by a woman named Lenore, who is willing to take them to Desmize to help kill the Kraken. The characters have gotten to know many of the other NPCs on the crew including Beatrice (a tiefling barbarian who controls the engine that helps power the ship’s movement), Fitzwilliam (an elvin man who works the telescope and helps with navigation), Jo and Antonio (two human former assassins who are in charge of the ship’s defense), and Cassandra (Lenore’s 11 year old daughter). Theodemir has been flirting non-stop with Lenore throughout the whole journey, but Lenore hasn’t been buying it. Together, they have traveled from Union Isle all the way down to the town of Thernuwchelles where they need to stock up on supplies and repair their ship. In the last session, the ship was suddenly attacked by a pirate gang from the Kavarbis area known as the Goud Goblins. After much mayhem and destruction, Onyx was able to kill the Captain of the Gouds with a sneak attack and Hank was able to kill some goblins with acid spray. The remaining goblins were killed by a sudden rescue from the delivery ship named The Sparrow’s Heart. The captain of The Sparrow’s Heart is Captain Gilbert, Lenore’s ex-husband and the father of Cassandra. Lenore and Gilbert have had an escalating feud that has slowly become more over the top over time. This has included leaving each other on deserted islands, poisoning each other, seducing other crew mates, and more. The two of them are convinced by Hank to temporarily put aside their differences to help defeat the Kraken. And that is where we have stopped so far. The rest of the campaign will happen after break, and I frankly can’t wait.