The Family Photograph Project was a project done in my AP Literature and Composition class. I found photos of my family that I did not take and was not in and wrote a vignette about the moment the photograph was taken. I had to write this without describing exactly what was occurring in the photo, but what I believed the subject of the photo was thinking and experiencing. This project was inspired by a book we were reading in class called The Gangster We Are All Looking For by lê thi diem thúy. This novel incorporates many vignettes that help to tell the story of the protagonist’s past. 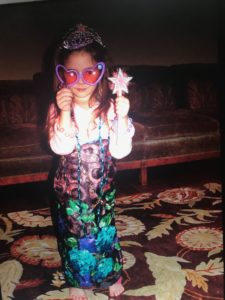 Lights were flashing everywhere she looked. All around her a sea of bright yellow and blinding white lights glared, almost cornering her in her garden. The paparazzi were back. The sycophantic fans went on for what seemed like miles. “Sadie, here!” cried someone. “Look this way!” pleaded another. Princess Sadie was used to this. She was dressed in her most expensive jewelry and attire. Her necklace of precious blue stones was carefully draped around her neck, coming to a stop right below her waist. Her dainty toes peeked out from underneath a skirt made from the finest silk. From behind her glasses, she viewed the world in a vermillion tint. Just the way she liked it. It was a nice change from the usual boring way most people viewed the world around them. She was so important she wore two crowns. Each placed precariously atop her sleek brown hair. She heaved a sigh of annoyance. She couldn’t even step out into her courtyard for a breath of fresh air without being bombarded by adoring fans. Nevertheless, she gave the cameras a pose. Her famous “fists up” stance with a cautious side-eye. It was a mystery as to how this became her signature move, but when she did it those watching went wild. The cheering and yelling could be heard by all.

Afternoons in the Summer 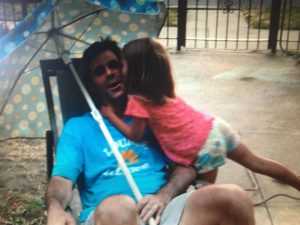 Tiny, bare, feet slapped against the pavement. Shrieks and giggles could be heard down the block. Smoke drifted up a few houses down. The air smelled of barbeque and damp summer heat. He saw people sitting on porches sipping icy drinks and eating popsicles, the juice melting down their arms creating sticky hands which led to sticky handprints. He sat in an old lawn chair resting beneath the shade of a dirty umbrella. It shielded him from the bright rays of the setting sun. A girl leaned in whispering a secret to him. Her hands rested loosely on his neck and her elbows laid on his chest. He heard her laughter interjected between what she was struggling to say. Beneath his feet, half faded chalk drawings told stories of lands with fairy princesses, rainbows, dogs, and mythical creatures. The residue coated the bottoms of his feet. The pole of the umbrella threatened to tumble out of his sweaty hands into the dirt, but he held on. His face tightened as he laughed, taut from spending all day out in the sun. The bridge of his nose was starting to blister and peel from exposure. His favorite baseball cap was missing but he was holding out on getting a new one in hopes of finding it. The rest of his face remained, for the most part, untouched except for his slightly rosy cheeks and forehead. “Don’t worry,” he told himself. “Tomorrow it’ll turn into a tan.” 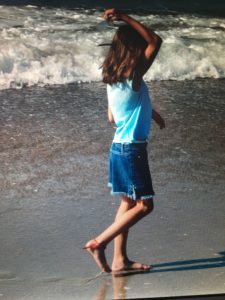 She flung the sea glass back past her head. Discarded rocks, shells, and glass trailed behind her. Those that made the cut filled her pockets till they bulged and swelled, heavy with the weight of her findings. Water came and washed over her feet, cooling her. The sand scrunched and left indents reminding her of where she had stepped. Her hair was brushed out of her face by the warm breeze that whistled in her ears. She was in a world of her own. Her anklet that she had made herself out of scrap pieces of thread from her grandmother’s sewing basket dragged and stuck to her foot. It collected grains of sand and turned a brownish hue. Sand embedded in her knees left imprints from when she had been building sandcastles. They were perfectly manufactured so that the incoming tides would fill moats around delicate castles. Her shadow led the way and she followed it. Step after step, always trusting. The sweet-salty perfume of the ocean filled her nostrils with every inhale she took. The fresh air of the ocean was a nice change from that of the city with its claustrophobic crowds, clanging trains, and revving cars. These familiar beaches were the ones she returned to year after year with her mom, sisters, and grandmother. It was her second home. She continued on her quest for lost shells, glass, and rocks. 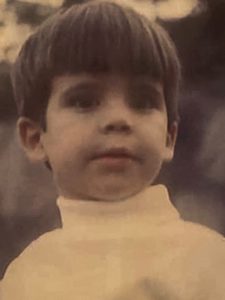 The wool of his turtleneck sweater clung around his neck, almost choking him. It’s itchy fibers tickled and poked at the skin that it lied upon. The muscles in his cheeks ached from plastering on superficial smile after superficial smile. It was time for a break. His bare feet squished in the damp earth. His toes writhed in the dew like worms. The frayed hem of his pants was kissed with mud caked around the edges, a detail the photographer had decided to leave out. His mother stood on the sidelines along with his two sisters who were patiently waiting for their turns. He wished it could be their turn. The photographer instructed him to “turn this way” or “smile more.” He did not listen. His mind was elsewhere, thinking about all the things he could do once he was out of his scratchy sweater and the bright hot light of the camera. He wanted to run down the splintery wooden steps that led to the beach below. He would wade into the water, it would wash away the dried dirt on his pants and he would reach down into the depths and pull out hazy glass and shining stones. The hot sand would stick to his feet but he didn’t care. He stared into the lens of a camera. 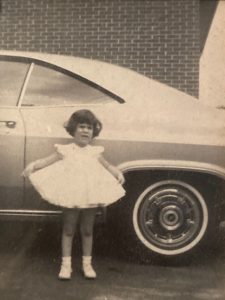 Her eyes squinted, almost shut, as she looked at the camera. The sun was perfectly aligned with the lens and it propelled a beam of light onto her face. Her mother had already scolded her for leaning against the car in her brand new white dress. Her knees had locked after taking photos for so long but she didn’t mind. She pulled the bottom of her dress out on either side to show the camera her full outfit. The fabric was so heavily starched this was not even necessary. She loved the way her steps sounded as she walked in her shoes. The tip-tap the metal bottoms made as she walked on the pavement made her feel like a fancy business lady or a dancer. Sometimes, when no one was watching, she would slide on her shoes, buckle the clasp, and dance around her room humming different songs. She could feel her socks sliding down her calves to her ankles but she didn’t dare pull them up at the cost of ruining the picture. It was autumn and she was chilly in her dress, but she pretended she didn’t notice. To try and warm up she dreamed up thoughts of hot chocolate with pillowing marshmallows and scalding soup. She couldn’t wait to see how the pictures would turn out.